After years of waiting Android users finally gets the Airdrop like app for their devices called “Nearby Share”. But before knowing about this app first we need to understand what is Airdrop and how it works on iOS devices.

Airdrop allows iOS users to share files like photos, videos, contacts and even map location to one device to other device easily. AirDrop basically runs on WiFi and Bluetooth and extremely simple to use.

For Android devices earlier we used to upload file on cloud and then share the link with other Android users or we used 3rd party apps like Xender but due to security reasons many users avoided that app as well. Recently government already banned apps like Shareit and Xender so, it was the perfect time for Google to acquire the empty space.

Nearby Share is the perfect app to share files like photos, videos and other kind of file on near by Android devices. This feature will save big time of Android users.

Step 4 – Now your phone will locate the nearby Android devices

Step 6 – Tell other Android device to click on “Accept” button

Simple, isn’t it? Nearby Share is not a mobile app so, don’t look in Android Play Store. It’s inbuilt added feature on Android which makes it more easy and simple for users.

Now you might be wondering that which protocol or method Google uses to share this file. Well, here Google will pick up best file sharing method depends on the environment and it could be Bluetooth, Bluetooth Low Energy, WebRTC, or peer-to-peer WiFi. You can change certain settings of file sharing as well on your android device.

To use this feature users don’t need to download any app from the play store or doesn’t require to buy new smartphone. This feature will work on any device which has Android 6.0+ version. Currently this Nearby Share feature rolling out on certain Google Pixel and Samsung devices and soon will roll out on all devices having Android 6.0 or later versions. 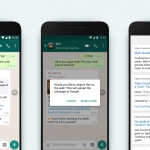 8 Mobile Security Tips to Protect Your Smartphone and Tablet Against Rising...
Scroll to top